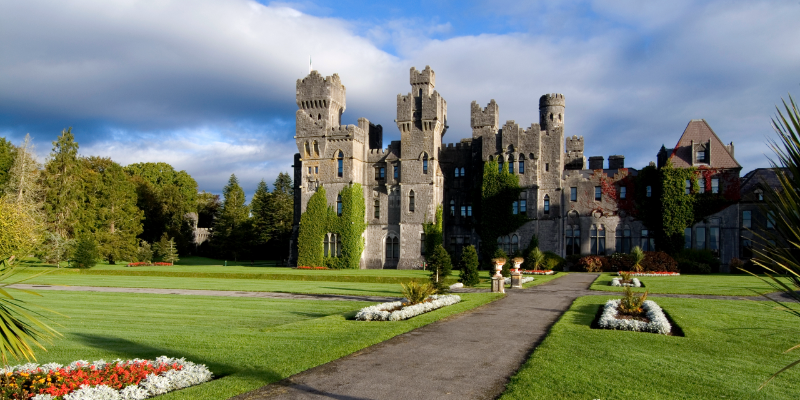 Rooms, ruins or romantic views – here’s our favorites for your next epic trip

Big Question: Which castles do you want to visit in Ireland? With more than 30,000 castles and fortifications scattered all over the country, it’s no small task to narrow down a list. In the name of chivalry, we have gallantly put together a list of our favorites with a little something for everyone: Elegant overnights, major destinations, military & political history and of course, romantic and beautiful locations. No trip to Ireland is truly complete without a castle visit, so have fun staying in any one of these on your next Celtic adventure.* 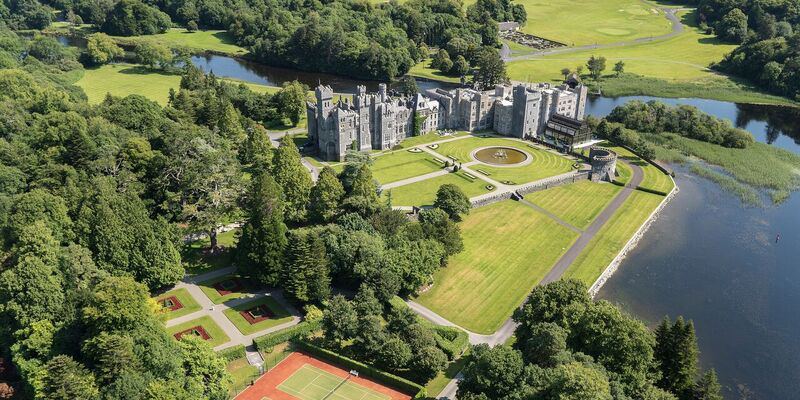 How much luxury can you fit in one castle? As it turns out, when there are 83 suites and rooms, and six restaurants on a 350-acre property – it’s a lot. When you enter through Ashford Castle’s stone gates, you’re seeing an 800-year-old castle that’s also widely recognized as Ireland's grandest hotel destination.

A sprawling stone structure situated lakeside in the gorgeous Connemara Countryside, this elegant castle has been home to the Guinness family, and hosted royalty of the crown (King George IV) and screen (John Wayne) alike. Elegant dinner in the dungeon with locally sourced fresh ingredients? You got it. Falconry out back? It’s done. A round of golf and followed by luxurious a spa treatment? You’ve come to the right place. 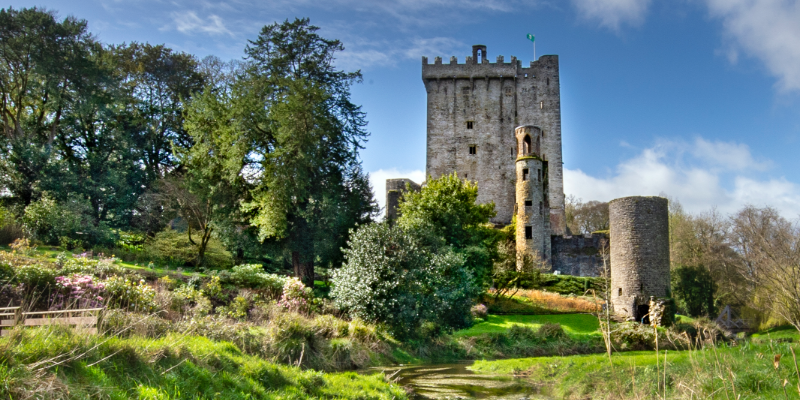 What’s been built three times, is world famous, and has a chatty heart of stone? It’s Blarney Castle (obviously). Built nearly 600 years ago by legendary Chieftain Cormac MacCarthy, Blarney Castle and its heralded rock are Irish countryside icons. The castle itself is a sight to behold but the real star of the show is its famed sedimentary resident.

Its formal name is “The Stone of Eloquence,” but you can call it Blarney Stone for short. As legends have it, you’ll inherit the gift of the gab once you kiss it. Upside down. On the battlements. Don’t worry – it’s perfectly safe. Not feeling up for a smooch? Take a stroll through the castle grounds and lose yourself in 60 acres of gorgeous, curated garden, one of which is the only poisoners gardens in Ireland. 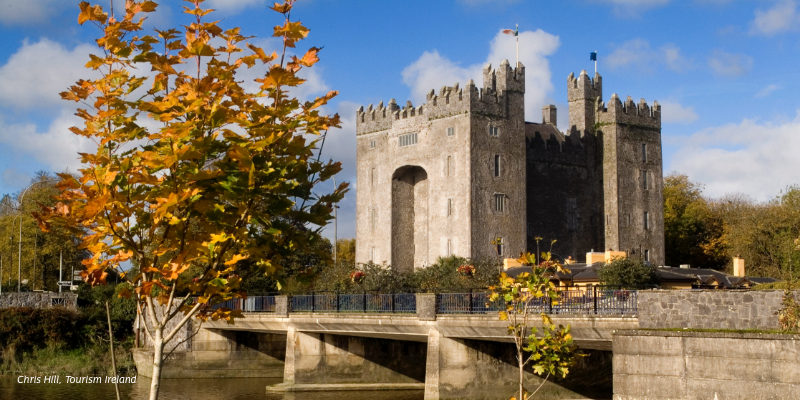 This castle isn’t ratty or tatty in the slightest despite its name – in fact it’s the most complete, historically accurate restored castle in Ireland. The site of the castle dates to 970 A.D. when it was a Viking trading site, which evolved into a stronghold until the current castle was built in 1425, then brought back to life in 1954. 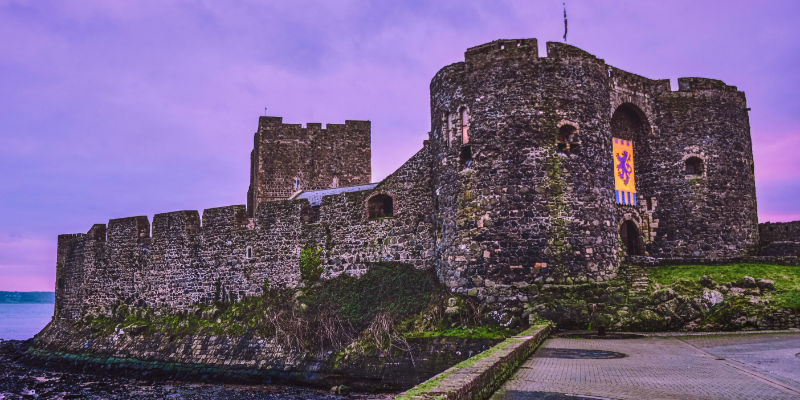 This place has been BUSY. Since its start, this castle has only recently taken leave from harborside fortress duties. Still in military use until 1928, Carrickfergus is situated on the northern shore of Belfast Lough and has a lengthy track record as key player in military power struggles for over 800 years.

The stronghold has been besieged by the Scots, English, Irish and French and changed hands at various points throughout centuries. You want a quick castle visit and military gravitas? Carrickfergus has it all the way down the stones of its bones. 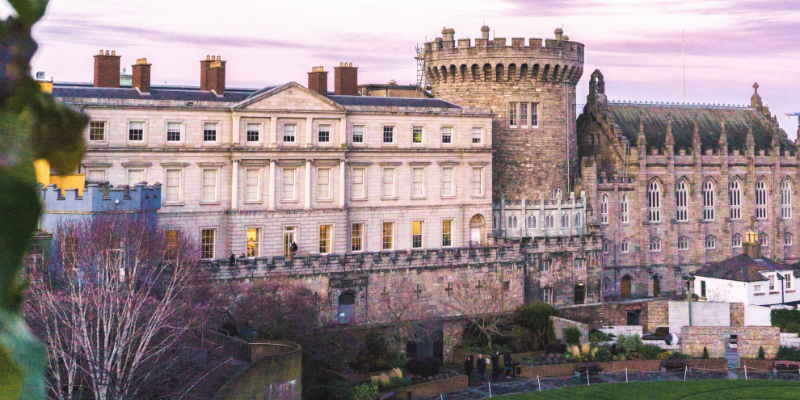 You want a castle with political intrigue? We got it. Historically, this extremely important castle in Ireland’s capital wasn’t actually an Irish castle: It was the seat of English rule in Ireland. Symbolically, as big deal castle goes – Ireland winning this one is the biggest. So, when its last viceroy handed the castle over to Michael Collins in 1922, it signaled the end of seven centuries of occupation.

Now, its stout medieval tower looks out onto Dublin, holding centuries of secrets behind 4-meter-thick walls. If you visit, there’s tours of the State Apartments, a Viking excavation, a royal chapel and gardens, and highlights of the struggle for independence. Its multitude of eras and roles can be seen reflected in the ground’s architecture and structures, some of which are still in use for formal government functions. 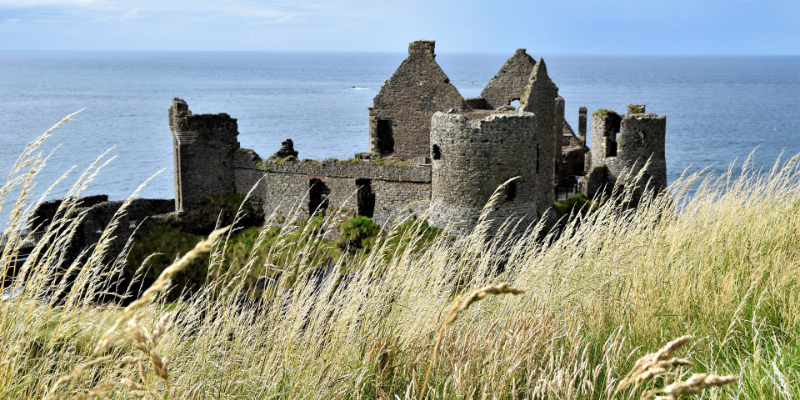 Only partly in the mood for a castle visit? How about just visiting parts of a castle? The iconic craggy ruin that is Dunluce Castle perches atop County Antrim’s steep coastal cliffs. Long abandoned, much of it is tumbled down into the sea or removed centuries ago to build other structures. Featured as the crumbling seat of House Greyjoy in HBO’s “Game of Thrones,” Dunluce has a stark (no pun intended) reputation all its own. First a fortress built by a Scottish mercenary family, it has legends of an entire kitchen wing falling into the ocean, plus a resident banshee spirit.

If you dare make your way to the hollowed-out halls of Dunluce, you can enjoy exploring the findings of archaeological digs from the tumbled down houses and streets of the old Dunluce Town. 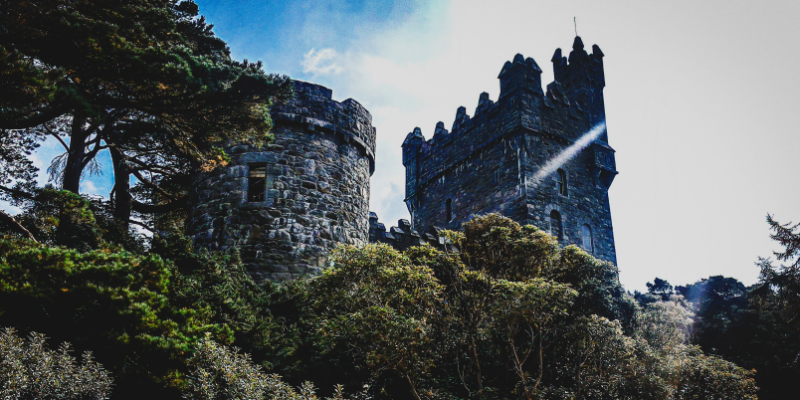 When you think of castles, are you envisioning peaked towers secluded in a storybook countryside? Yes? Perfect – Glenveagh is where you want to go. Built in the 19th century to compliment Victorian notions of chivalric romance, this castellated mansion is a must-see in Glenveagh National Park County Donegal.

Whether you’re taking a day walking trip or are camping out in the park itself, give yourself an up-close look of the lovely Glenveagh Castle on a guided tour, or just stroll through its formal gardens and rhododendron woods. Poetic, historic irony: the original owner John Adair, once cleared the area of its residents to give himself privacy and now the castle belong to the public trust.

*Some Castle tours may be suspended due to Covid-19 safety precautions at present. Always check with your planner for activity availability and ticketing needs. 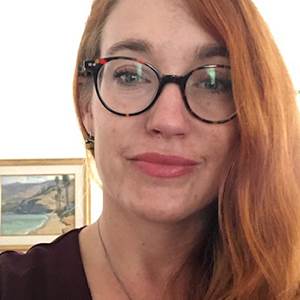