From $3,825* USD
Travel with Claire and Jamie on a blockbuster trip inspired by the award-winning drama about their love affair through the ages. Visit some of the notable film locations and other highlights of Scotland, including the Scottish Highlands, Orkney Island and the Isle of Skye.

Soak up the mystical atmosphere of Auld Reekie this morning as you join a Local Specialist for an intriguing sightseeing tour of the city, including a visit to Edinburgh Castle perched atop Castle Rock. Tread in the footsteps of Jamie and his beloved sassenach, embarking on an Outlander walking tour through Old Town's winding cobblestone lanes. Spend the rest of the day at leisure seeking out more locations of Outlander fame like the Palace of Holyroodhouse.

We visit the 15th-century walls of Blackness Castle on the shores of the scenic Firth of Forth – the backdrop for the infamous Fort William prison in Outlander season 1. Then, cross the Forth to the fictional village of Cranesmuir, real-life Culross, delving into tales of witchcraft and spells. Here we'll see Claire's herb garden and Geillis Duncan's home in the remarkably well-preserved 16th-century town centre.

Celebrate rural Scottish heritage at the Highland Folk Museum, with its recreated 18th-century township, once used as a location in the filming of Outlander season 1. Dive Into Culture and gain insights into rural life in Scotland from the 18th century to the mid-20th century, admiring the extensive collection of artefacts. We continue through the rugged landscapes of the Scottish Highlands to explore the cultural capital of the Highlands, Inverness.

We start the day with a visit to the bloody battlefield of Culloden, where Bonnie Prince Charlie's Jacobite army was defeated in 1746. The windswept moors on which this final battle took place played a significant role in the Outlander series as the catalyst which forced Claire and Jamie to part ways. We relive the brief, but brutal battle at the contemporary Visitor Centre, before heading to Thurso, the most northerly town in mainland Scotland, and our home for the next two nights.

We leave the craggy landscape of Skye behind, boarding a ferry back to the mainland to Mallaig. Our journey continues to Fort William via the magnificent Glenfinnan Viaduct, the now famous 'Harry Potter' bridge which Hogwarts Express crosses on its journey across the Scottish Highlands. Impressive in their own right are the exquisite views of Britain's highest mountain, Ben Nevis, which you’ll get to admire before travelling past the precipitous mountains of Glencoe to see the 'Glen of Weeping'. Despite the tragedy that befell the Clan MacDonald here in 1692, the irresistible beauty of this place cannot be denied and you’ll spend a quiet moment paying tribute to the brave clansmen who lost their life in the massacre. Our final stop today is Pitlochry on the banks of the Tummel, a quaint little town best known for its natural beauty, fresh air, and rich Victorian heritage.

Today, we Dive Into Culture and learn about the local whisky industry at the famous Blair Athol Distillery, one of the oldest whisky distilleries in Scotland. You’ll learn how the distillery was founded in 1798 and how it makes its famous 12-year-old Single malt using the ancient water source which flows from the foothills of the Grampians right through the ground to the distillery. You’ll also get to sample its smooth flavours out for yourself, enjoying a wee dram of Scotland's much-loved golden nectar and perhaps buying a bottle as a special souvenir of your trip to the Highlands

Head to Doune Castle, which served as the film location for Castle Leoch in Outlander. We see the site where Clan Mackenzie welcomed and hosted Claire upon her arrival in 18th-century Scotland, then head to Stirling and its magnificent castle, a symbol of Scottish national pride and once home to Scottish royals including Mary, Queen of Scots. Explore its halls, chapels and bedrooms, see the famous 'Stirling Heads' and admire the poignant Wallace Monument and battlefield of Stirling Bridge from its 16th-century walls. View the site of the Battle of Bannockburn, before arriving in Glasgow for an orientation tour of the city, including a visit to the masterfully crafted St. Mungo's Cathedral, the Outlander film location for 'L'Hopital des Anges' in Paris. It was here that Claire persuaded Mother Hildegard to let her put her medical knowledge to good use. Evening at leisure.

This morning we see Linlithgow Palace, which doubled as the prison entrance and corridors of Wentworth Prison where Jamie was imprisoned in season 1. Next, we visit Callendar House where the authentic Georgian working kitchen was used as part of Bellhurst Manor, the home of the Duke of Sandringham, during Season 2. Our encounter with Highland stories not yet at its end, we join the Wood family at their 15th-century farm on the shores of Loch Ard, where we’ll Connect With Locals over a home-cooked Farewell Be My Guest Lunch amidst intriguing tales of Rob Roy. 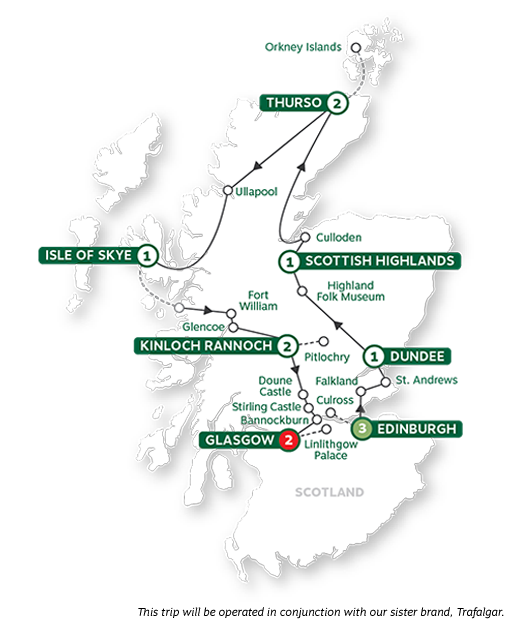